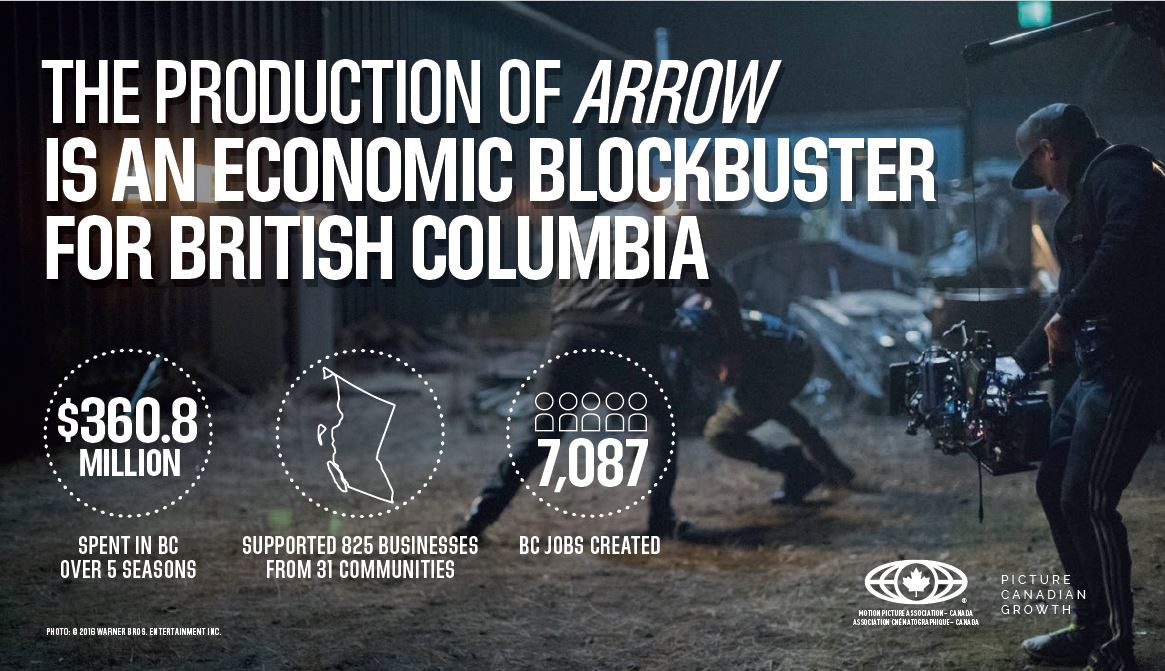 Warner Bros. Television’s Arrow a huge hit for British Columbia’s economy, Spending over $360 million and creating over 7,000 jobs over the last five seasons

An economic analysis released today outlines the substantial economic impact Warner Bros. Television’s Arrow has had on the Province of British Columbia over the course of five seasons of filming.

The report by Canada’s MNP LLP examines the fourth season of production to assess the economic impact of the production since the series began.  Over the last five seasons, the production created 7,087 jobs and was responsible for $360.8 million in direct production expenditure in the province. In season four alone, the production spent $44.3 million on crew and labour, and $27.9 million on goods and services.

Arrow’s incredibly loyal fan base tune in each week to see hooded vigilante Oliver Queen, played by Canadian Stephen Amell, fight crime in his home of Star City armed only with his wits and a bow and arrow.  This season included an ambitious four-night “Heroes vs. Aliens” crossover event featuring Arrow, The Flash, DC’s Legends of Tomorrow, and Supergirl, all filmed in beautiful British Columbia.

A look behind the scenes at Arrow also reveals approximately 825 businesses from 31 communities across British Columbia benefited from the series’ production, including 15 communities in Metro Vancouver and 14 communities from Vancouver Island, Thompson/ Okanagan, and the Mainland/Southwest regions: Everything from large production facilities, special effects companies, and hotels to small local retailers, dry cleaners, restaurants, and catering businesses.

Not only do local communities benefit from productions like Arrow, but last year the entire production participated in the REEL Thanksgiving Challenge 2016, going above and beyond in raising $37,272.50 in funds and food donations for the Greater Vancouver Food Bank, far outpacing their competition.

“British Columbia has become the home for our superhero lineup, and we are thrilled with how the local communities have embraced these productions,” said Andrew Kreisberg, Executive Producer, Warner Bros. Entertainment. “We have unbelievable talent and crews who work tirelessly to make this show the success that it is, not to mention a beautiful province to film in.”

“With over $360 million spent locally over the last five seasons, it is easy to understand Arrow’s enormous economic benefits for British Columbia,” said Wendy Noss, President, Motion Picture Association-Canada. “Arrow is just one of today’s most popular television superhero series that call B.C. home, and demonstrate the many benefits of a sustainable incentive program that attracts investment, creates jobs and makes a positive impact on local business and communities.”

“Over the course of five seasons, Arrow has created over 7,000 jobs in British Columbia and has contributed over $360 million to our province’s economy,” said the Hon. Shirley Bond, Minister of Jobs, Tourism and Skills Training and Minister Responsible for Labour. “Last September, as part of Screen in B.C. Day, I was able to tour the set of Arrow and see firsthand how the talented crew, designers, and artists bring this show to life. I’m proud that British Columbia has become a key location for film and TV production in North America, and thank Warner Brothers for their continued investment and support in our Province.”

About MNP LLP:
MNP is the fastest growing chartered accountancy and business advisory firm in Canada. Founded in 1945, MNP has grown to more than 70 offices and nearly 3,000 team members. MNP is a member of Praxity, a global alliance of leading business advisory firms. MNP’s Economics and Research practice is one of the largest of its kind, and its team members have an established track record in conducting economic impact and industry studies, including studies involving the film and television production industry. Examples of similar studies conducted by MNP include economic impact studies for film and television industries in jurisdictions across North America.