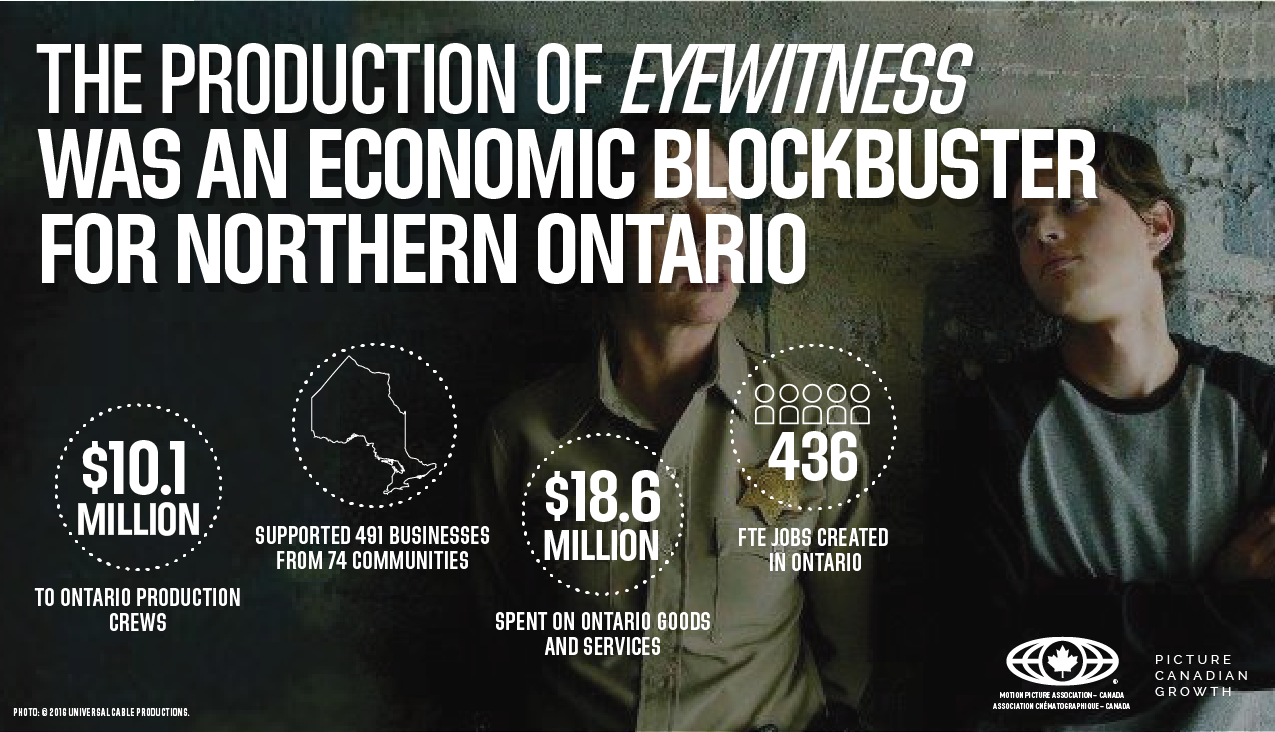 An economic analysis released today outlines the significant economic impact the Universal Cable Productions limited series Eyewitness had on the Province of Ontario.

The report by Canada’s MNP LLP examined season one of production to assess its economic impact. The production created 436 jobs and was responsible for $28.7 million in direct production spend in Ontario, including $10.1 million spent on crew and labour, and $18.6 million on goods and services.

Based on a popular Norwegian crime drama, the production of Eyewitness transformed communities in Northern Ontario over the course of several months of filming last year. Filmed primarily in West and downtown Parry Sound, the production used the former William Beatty School on Gibson Street as its home base and the former North Star office and Parry Sound Courthouse for filming.

The first season engaged approximately 491 vendors from 74 communities, 15 of which were located in the Greater Toronto Area. 59 communities were engaged in other regions of Ontario including Barrie, Bracebridge, McKellar, North Bay, Parry Sound, Rosseau, Seguin and Sudbury.

When productions choose smaller communities to film, they can make a big impact economically. In the case of Eyewitness, the businesses that benefitted included equipment and party rental companies, sign companies, production facilities and film studios, furniture and clothing retailers, resorts, hotels and restaurants, and plumbing and electrical contractors to name a few.

“Our government’s investments in the province’s film and television industry are producing tangible results across Northern Ontario,” said the Hon. Bill Mauro, Minister of Northern Development and Mines. “This report demonstrates the significant economic value of bringing large productions to the North with the help of funding through the Northern Ontario Heritage Fund Corporation. Productions like Eyewitness are creating good jobs, boosting the Northern economy, and making the lives of Northerners better.”

“With Ontario’s film industry celebrating three straight record-breaking years, I have spent a great deal of time as Minister speaking about the value a robust film industry has on our quality of life and economic vitality,” said the Hon. Eleanor McMahon, Ontario’s Minister of Tourism, Culture and Sport. “The analysis being released today reinforces the importance of our film industry and highlights the impact that like projects like Eyewitness can have as economic generators for Parry Sound and other engaged communities. I’m thrilled with the success that our industry is enjoying and look forward to working with leaders in film and television to further support job creation in Ontario.”

“The woodland setting of Parry Sound established the ideal backdrop for Eyewitness, reinforcing the mysterious thriller elements surrounding the show. Working with the Northern Ontario Film Studios was a seamless experience as they facilitated the process of setting up production in different parts of town making it possible for us to capture the best footage for the series,” said Mark Binke, Executive Vice President of Production, Universal Cable Productions. “Ontario remains home to standout talent, crews, and production facilities in a cost competitive environment, which is why Universal Cable Productions is drawn to producing a growing number of television projects across the province.”

“The film industry is a growing part of Ontario’s economy, and this analysis helps to illustrate the incredible impact of film production on economic growth and jobs in communities like Parry Sound,” said the Hon. Brad Duguid, Ontario’s Minister of Economic Development and Growth. “Projects like Eyewitness also demonstrate how more and more communities in our province are benefitting from a vibrant Ontario film industry.”

MNP is the fastest growing chartered accountancy and business advisory firm in Canada. Founded in 1945, MNP has grown to more than 70 offices and nearly 3,000 team members. MNP is a member of Praxity, a global alliance of leading business advisory firms. MNP’s Economics and Research practice is one of the largest of its kind, and its team members have an established track record in conducting economic impact and industry studies, including studies involving the film and television production industry.