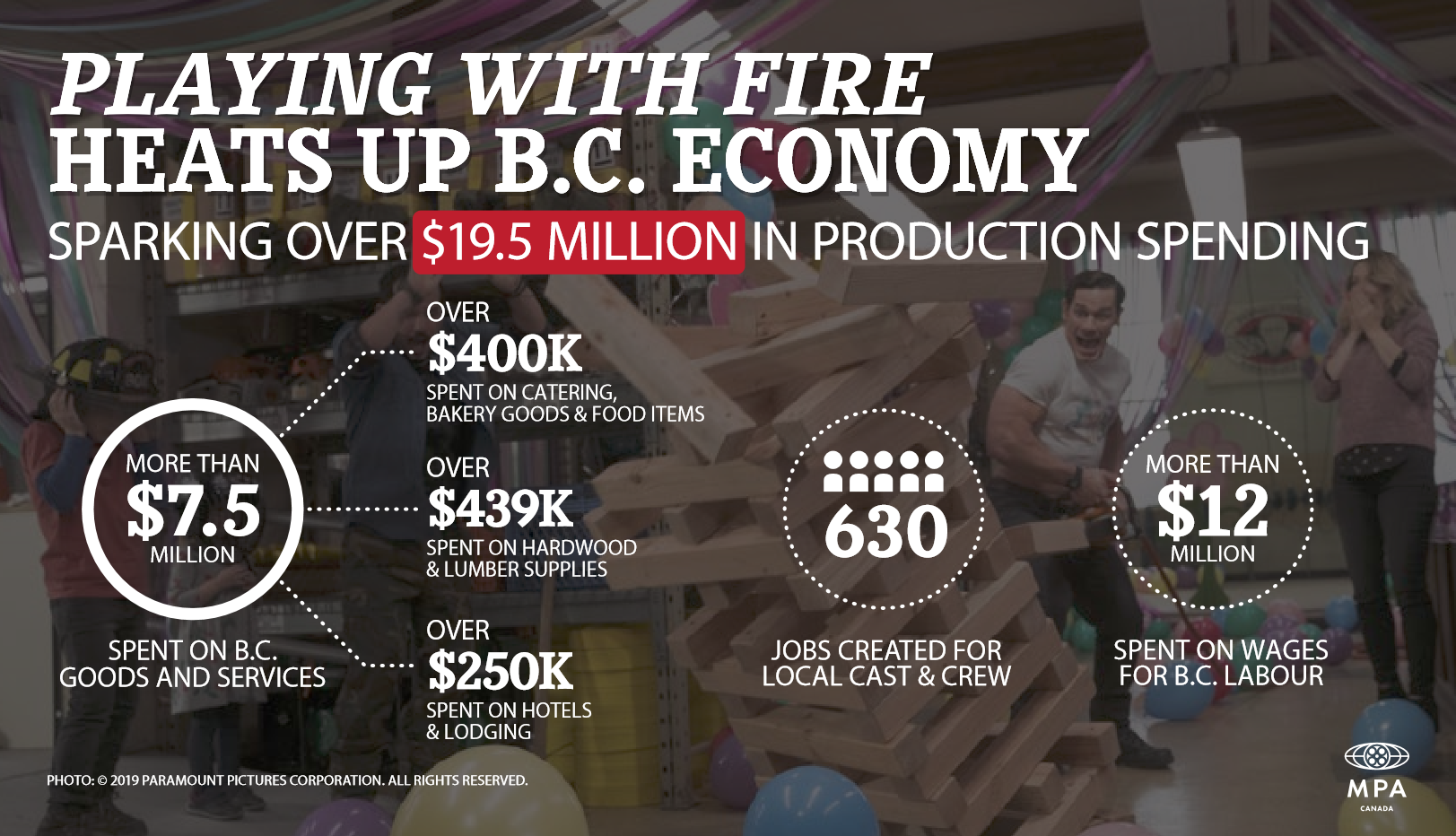 Playing with Fire heats up B.C. economy, sparking over $19.5 million in production spending

New data released today demonstrates the significant impact of Paramount Pictures’ Playing with Fire on the B.C. economy, with over $19.5 million spent on production in the province.

Local businesses in communities across the province benefitted from over $7.5 million spent on B.C. goods and services, including more than:

“When major studios bring blockbuster productions to BC, it’s talented local cast and crew who make movie magic,” said the Hon. John Horgan, Premier of British Columbia. “Congratulations the 600+ British Columbians who helped bring Paramount’s Playing with Fire to audiences around the world. The wealth of knowledge and expertise within our film community is a key factor that attracts film and television productions to our province, in-turn supporting our economy and creating local jobs.”

“B.C.’s motion picture industry is globally recognized as a filming destination and business partner of choice, and we’re proud to have contributed to Playing with Fire,” said Prem Gill, CEO of Creative BC. “Our best-in-class talent, services, locations and infrastructure combine with a collaborative network of supports at all levels of government and industry to deliver excellence while sustaining incredibly positive impacts—both to the province’s economy and for the people who love working in this industry.”

“Brent, Zoe, and Monique played integral roles within the local team of professional artists and technicians from IATSE Local 891 who helped create Paramount’s Playing with Fire,” said Phil Klapwyk, Business Representative, IATSE Local 891. “Our members’ reputation for excellence and experience is one of the factors that attracts productions to B.C. We’re proud to be part of a thriving creative economy and to contribute to the benefits that its success brings to communities across the province.”

“Filming in B.C. provided us with excellent production infrastructure and outstanding local cast and crew for Playing with Fire,” said Lee Rosenthal, President of Physical Production, Paramount Pictures. “The local businesses and vendors were also terrific to work with, meeting all of our production-related needs.”

“The data released today demonstrates the significant impact just one feature film can have on the local economy,” said Wendy Noss, President, MPA-Canada. “Playing with Fire created hundreds of jobs for British Columbians, and showcased the talented work of Canadian Creatives working behind the scenes.”

Follow us on Twitter and check out The Credits for behind the scenes interviews with Canadian creatives.