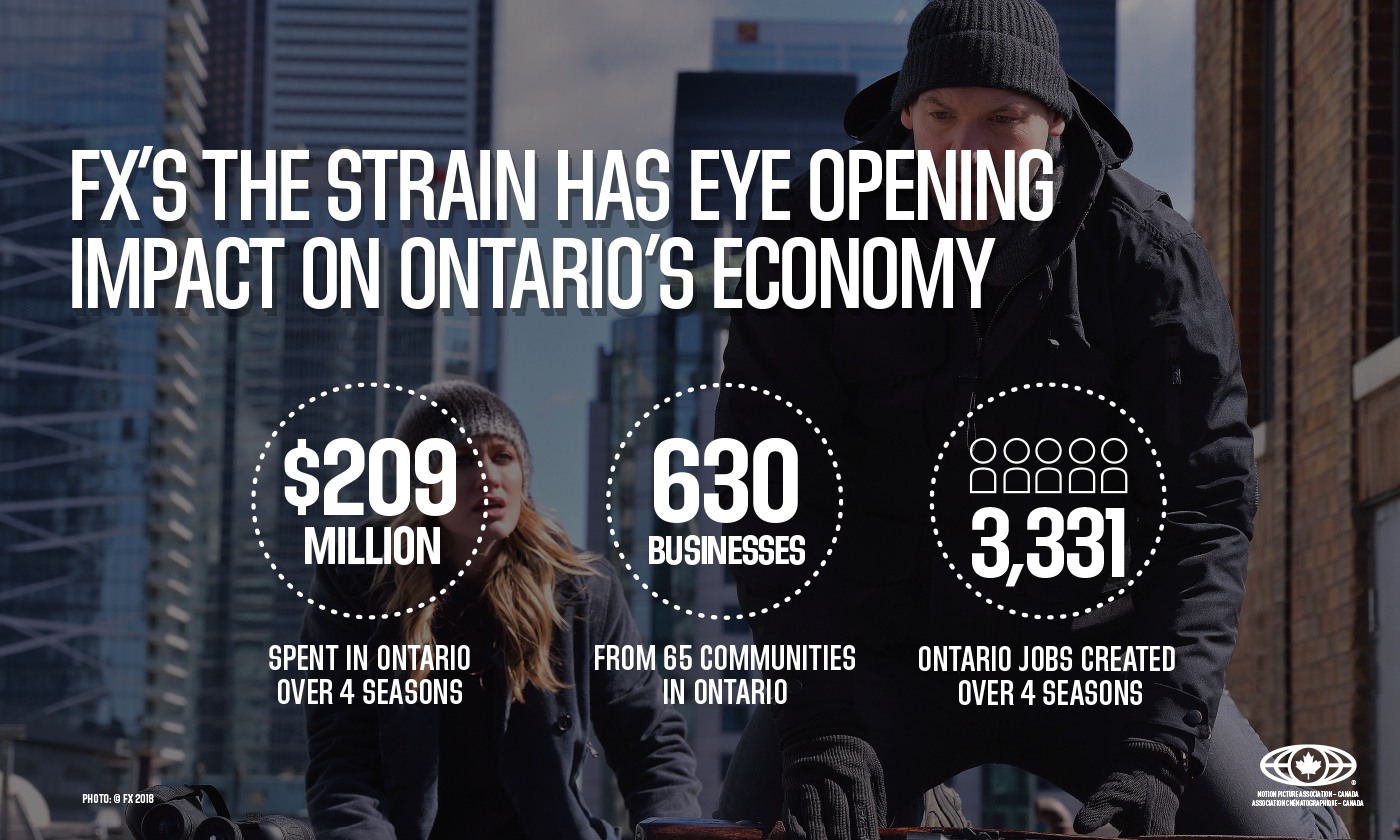 TORONTO, ONTARIO – New data released today examined the economic impact Season Four of FX’s The Strain has had on the province of Ontario. In its most recent season, the production spent close to $51 million and created almost 800 jobs. Almost $27 million was spent on Ontario production crew and qualifying labour, while $24 million was spent on purchases from Ontario businesses, including goods and services. Production of seasons one through four showed total spending in Ontario at an astonishing $209 million, and 3,331 local jobs created.

The analysis by Canada’s MNP LLP highlighted more than 630 businesses who benefitted from the production from 65 communities across Ontario, including retailers, production facilities, security services, equipment rental companies, dry cleaners, hotels and restaurants, catering companies, automobile rental companies, alteration and repair services, and hair and make-up services. 32 of the communities were located within the Greater Toronto Area, while 33 communities were in other regions of Ontario.

Filming of this thriller drama series took place primarily in and around Toronto, with the economic impacts created for hundreds of Ontario residents and businesses. The series is based on the novel of the same name written by Guillermo del Toro and Chuck Hogan.  Fans may recognize many iconic Toronto landmarks in the city, including Roy Thomson Hall, Massey Hall, the Royal Ontario Museum and the headquarters of the Ontario Heritage Trust to name a few.

The Hon. Sylvia Jones, Minister of Culture, Tourism and Sport said, “Our government for the people was elected with a strong mandate to ensure Ontario is once again open for business. The film and TV industry creates jobs and drives economic growth in Ontario. We are going to count on your industry to help us build the province and grow our economy. Congratulations to all involved in The Strain, a production which has been a tremendous success for the creative industry and for Ontario.”

The Hon. Jim Wilson, Minister of Economic Development, Job Creation and Trade said, “I congratulate FX’s The Strain on completing their fourth season of production. The film and television industry continues to create jobs and economic opportunities in Ontario. Our government is sending the message that ‘Ontario is open for business’ by creating an environment where businesses and industries, such as yours, can continue to thrive and grow.”

Chip Smith, Executive Vice President of Global Public Affairs, 21st Century Fox said, “Ontario has provided us a one stop shop to access amazing local talent and crews, incredible iconic backdrops, great production facilities, and hundreds of local vendors who are so supportive of the film and television industry.”

Bill Skolnik, CEO & Executive Director of The Director Guild of Canada in Ontario said, “When a major show like The Strain comes to Ontario it is not just the direct economic impact we benefit from, it’s also what the show leaves behind. Every Ontario Director, Production Designer, and Editor who works on a behemoth like The Strain can offer the skills and connections gained onto every future production, attracting even greater economic activity to our province.”

Wendy Noss, President, Motion Picture Association – Canada said, “It is clear from the report released today that The Strain has been an economic driver in Ontario, with $51 million spent in one season alone and close to 800 local jobs created. The film and television industry continues to be a significant job creator in the province, providing opportunities for Canadian creators and benefits for hundreds of local businesses.”

About MNP LLP:
MNP is the fastest growing chartered accountancy and business advisory firm in Canada. Founded in 1945, MNP has grown to more than 70 offices and nearly 3,000 team members. MNP is a member of Praxity, a global alliance of leading business advisory firms. MNP’s Economics and Research practice is one of the largest of its kind, and its team members have an established track record in conducting economic impact and industry studies, including studies involving the film and television production industry.