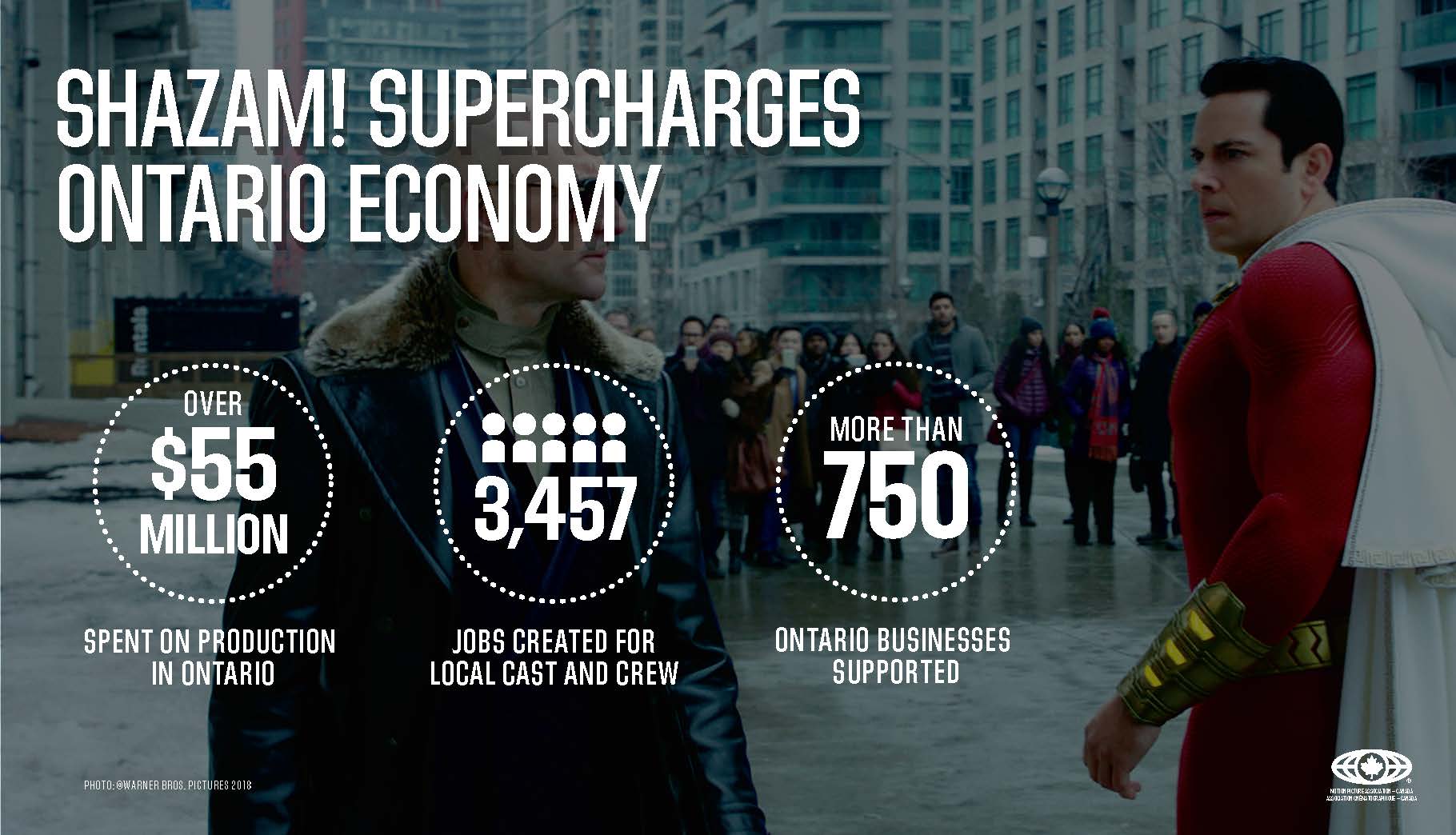 TORONTO, ONTARIO – April 5, 2019 – Economic data released today shows how a motion picture like New Line / DC’s Shazam! can electrify the Ontario economy. The production spent more than $55 million while filming in the GTA.

The production created jobs for 3,457 local cast and crew, and spent more than $31.3 million on Ontario labour. In total, the production jolted Ontario’s economy with $55 million in spending.

Shazam! is in theatres now.

“Our government for the people is ensuring Ontario is once again open for business. The film and TV industry creates jobs and drives economic growth in Ontario,” said Michael Tibollo, Minister of Tourism, Culture and Sport. “Major motion pictures like Shazam! continue to build this vital industry, keeping jobs in our province and growing our economy. Congratulations to all involved in this production, a true success for the creative industry and for Ontario.”

“Our government, working for the People, has made Ontario ‘Open for Business’ by taking urgent and necessary action to make Ontario a leading destination for investment and job creation. ‘Open for Business’ must also always mean ‘Open for Jobs,’” said Vic Fedeli, Minister of Finance. “Supported by Ontario film and television tax credits, this multi-billion dollar industry supports over 50,000 jobs in the province, including a large number of indirect and spinoff jobs. Our government is committed to providing stability and support to ensure this key Ontario industry can compete and remain one of the best in the world.”

“Shazam! is one of the largest and most exciting productions we’ve hosted in Toronto this past year, shooting in our studios, across the city and with our talented local crews,” said Mayor John Tory. “I want to congratulate the whole production team for making this extraordinary project and thank Torontonians for their continued support of this creative industry.”

“We loved filming Shazam! in Ontario. With access to top cast and crew, dynamic service providers, and amazing locations, the province provides access to everything a large-scale production requires,” said Kate Beyda, Executive Vice President, Physical Production, New Line Cinema. “We are thankful for our partnership with the Government of Ontario, the City of Toronto, and all of our local partners who we work with to create world-class entertainment, enjoyed by people all around the world.”

“The data released today reveals just how many talented industry professionals work in front of and behind the camera to make a major motion picture like Shazam!,” said Wendy Noss, President, Motion Picture Association – Canada. “As a major film and television destination, Ontario is attracting the world’s most exciting productions because it offers so much by way of creative capacity, stable production incentives, gorgeous locations, and a wide range of businesses in every corner of the industry supply chain.”