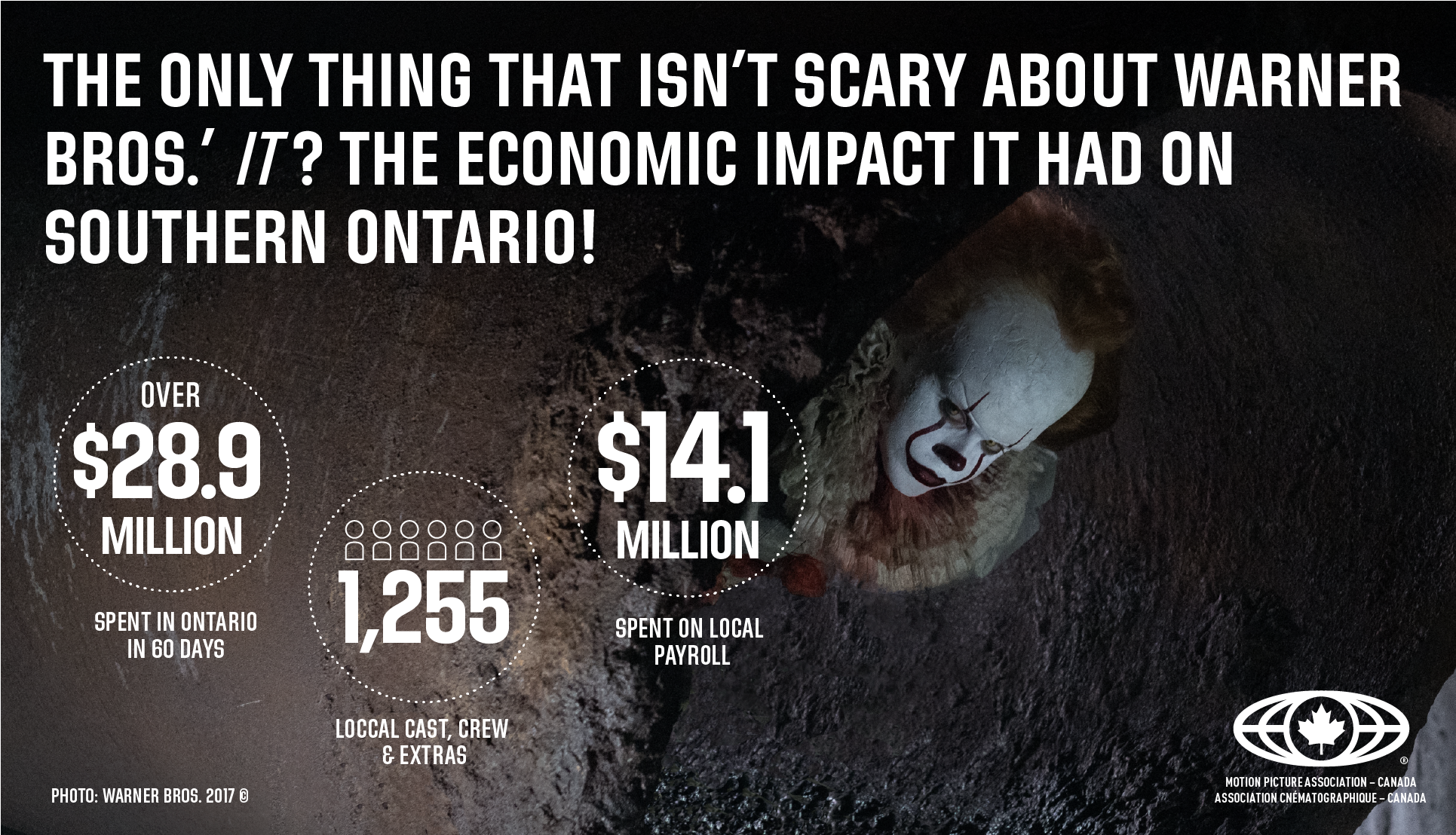 Warner Bros. Entertainment’s It hired 1,255 cast and crew over 60 days of filming, spent more than $28.9 MILLION in Ontario

In just 60 days of filming, It hired 1,255 cast and crew in Ontario, and spent over $28.9 million dollars on payroll and vendor expenditures. The production supported a wide range of local businesses, hotels, catering operations, restaurants, lumber and construction suppliers, as well as spending $14.1 million on local payroll.

When Ontarians head to the theatres this summer to see where IT lives, they may also recognize a number of key locations where filming took place. The production was a boost to the local economy in Toronto and numerous smaller cities throughout the province, including:

“Ontario provided a perfect backdrop for the production of It, using locations in cities ranging
from Port Hope and Milton to Woolrich and Toronto. The beauty of the locations provides
important contrast to the frightening milieu that the film creates,” said, Bill Draper, President,
Worldwide Physical Production, Warner Bros. Pictures. “All of the cities were gracious hosts
to the production and made it a positive experience for us to film in Ontario.”

“I’m thrilled to see yet another example of Ontario’s film industry thriving and leaving lasting
impacts in host communities,” said Eleanor McMahon, Ontario’s Minister of Tourism, Culture
and Sport. “With production taking place across southern Ontario, it is a perfect example of the
cultural and economic role major film projects can play by creating jobs, supporting local
businesses and promoting Ontario’s brand globally.”

“Production of the Warner Bros.’ film IT had a positive economic impact on the Municipality of
Port Hope, with close to $600,000 infused into our community from facility rentals, permits,
location fees, local accommodations, employment and various other production costs,” noted
Bob Sanderson, Mayor of the Municipality of Port Hope. “Highlighting our Municipality in a
feature film of this magnitude allowed Port Hope to shine as a destination of choice for both
the film industry and for those who, through the film, are exposed to the beauty and unique
historical flavor of our town.”

“Our film, television and digital industry has had booming success over the last couple of years
and with productions like It, the industry shows no signs of slowing down,” said Toronto Mayor
John Tory. “We have tremendous Toronto talent in front of and behind the screen, and it’s
great to see that in It. We’re working to bring more business to Toronto. We are ready for more
investment in this key economic driver for our city.”

“The numbers speak for themselves. Big-budget features such as It not only mean hundreds of
good jobs for the highly skilled film technicians across Canada, they have a massive spillover
effect where shooting occurs – and the entire area benefits,” said John Lewis, International
Vice President of the IATSE, Director of Canadian Affairs.