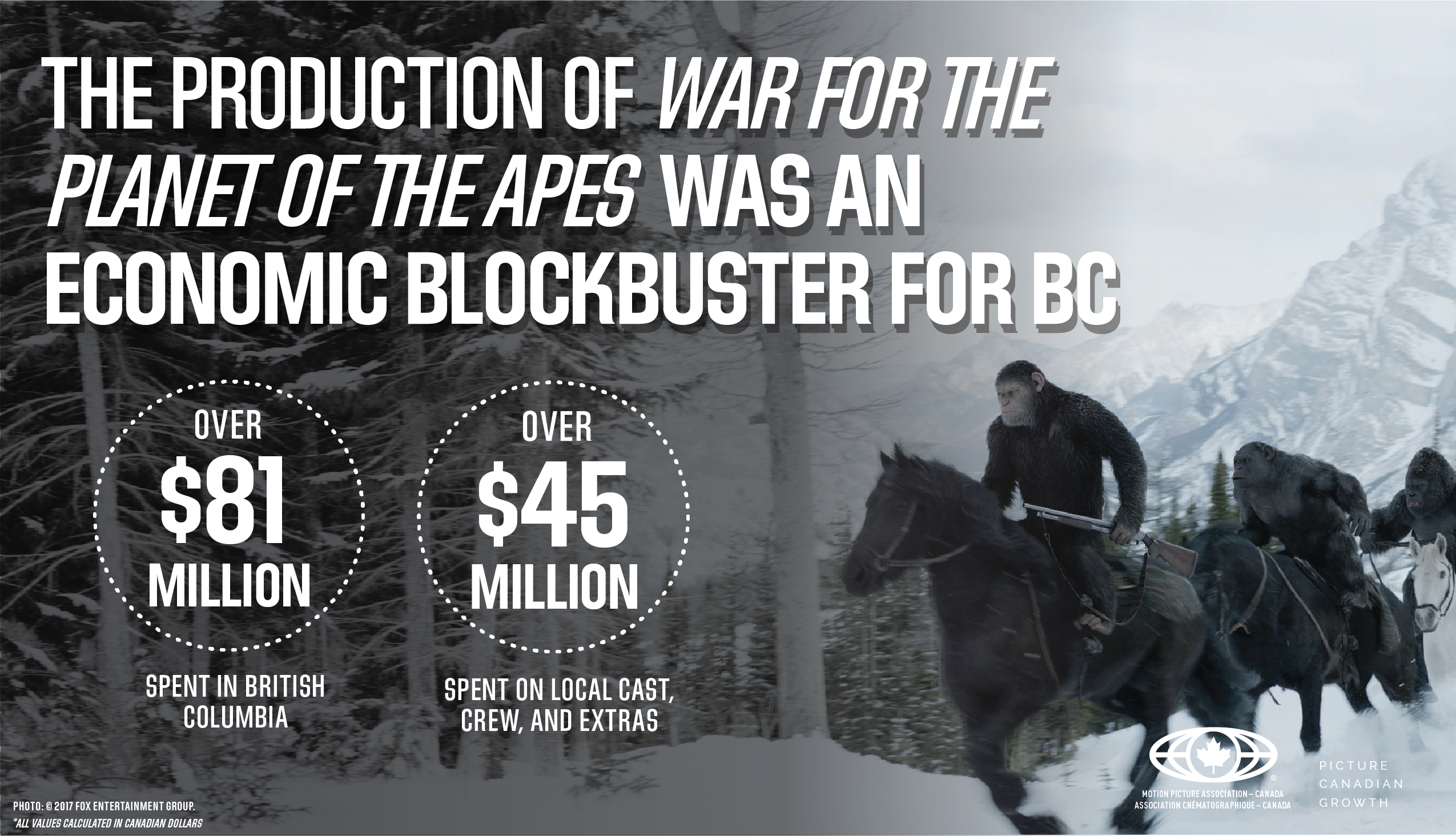 The production of War for the Planet of the Apes generated significant revenue for the province of BC, with over $81 million spent throughout the film’s 180 days of production. The benefits were also felt by talented British Columbians, with over $2.9 million paid to local office personnel and over $45 million spent on local cast, crew, and extras.

From a sprawling, custom built set in Richmond, to full hotels and restaurants in Tofino during the shoulder season– local vendors and businesses also feel the positives of blockbuster productions like War for the Planet of the Apes. Some of the key local expenditures included:

War for the Planet of the Apes not only had a massive economic impact, it is a showcase for the kind of high-tech production that BC has become known for around the world: From stunning performance capture technology, to the Academy Award®-winning green screen innovation designed by local British Columbia key grips David McIntosh, Steve Smith, Mike Branham and Mike Kirilenko.

“We were thrilled to bring production for War for the Planet of the Apes back to beautiful BC,” said Emma Watts, Vice Chairman for Twentieth Century Fox Film and President of Production for Twentieth Century Fox. “The province’s fantastic crews, quality talent, beautiful locations, and world-class abilities as a center for high-tech filmmaking are integral to the success of our blockbuster trilogy.”

“Our cultural industries are a key economic driver,” said The Honourable Mélanie Joly, Minister of Canadian Heritage. “This production is an indicator of the wealth of knowledge, expertise and capacity of the Canadian film industry to attract world class productions, which in turn creates jobs and supports the local economy.”

“The data released today signals the important role the film and television industry plays for BC’s economy,” said Wendy Noss, President of the Motion Picture Association – Canada. “Productions like War for the Planet of the Apes not only make a big impact on the screen, they also support thousands of cast and crew members, local businesses, and communities behind the scenes— from Vancouver to Ucluelet.”

“Creative BC markets British Columbia’s talent, infrastructure, digital and production services to attract and support projects like War for the Planet of the Apes,” said Prem Gill, Creative BC’s CEO. “As BC’s film commission, it’s exciting to see the economic impact our industry stimulates across the province. BC has earned a reputation for excellence and innovation, delivering to blockbuster productions through a skilled and collaborative network of world-class resources.”

“Blockbuster feature films like War for the Planet of the Apes allow BC artists and technicians to display their world-class talent and partner with Hollywood Producers to create on-screen magic. The ‘can do’ attitude and professionalism of our crews helps realize even the most ‘impossible vision’,” says Phil Klapwyk, IATSE Local 891 Business Representative. “If they can dream it, our members will find a way to make it reality.”

*All figures calculated in Canadian dollars.