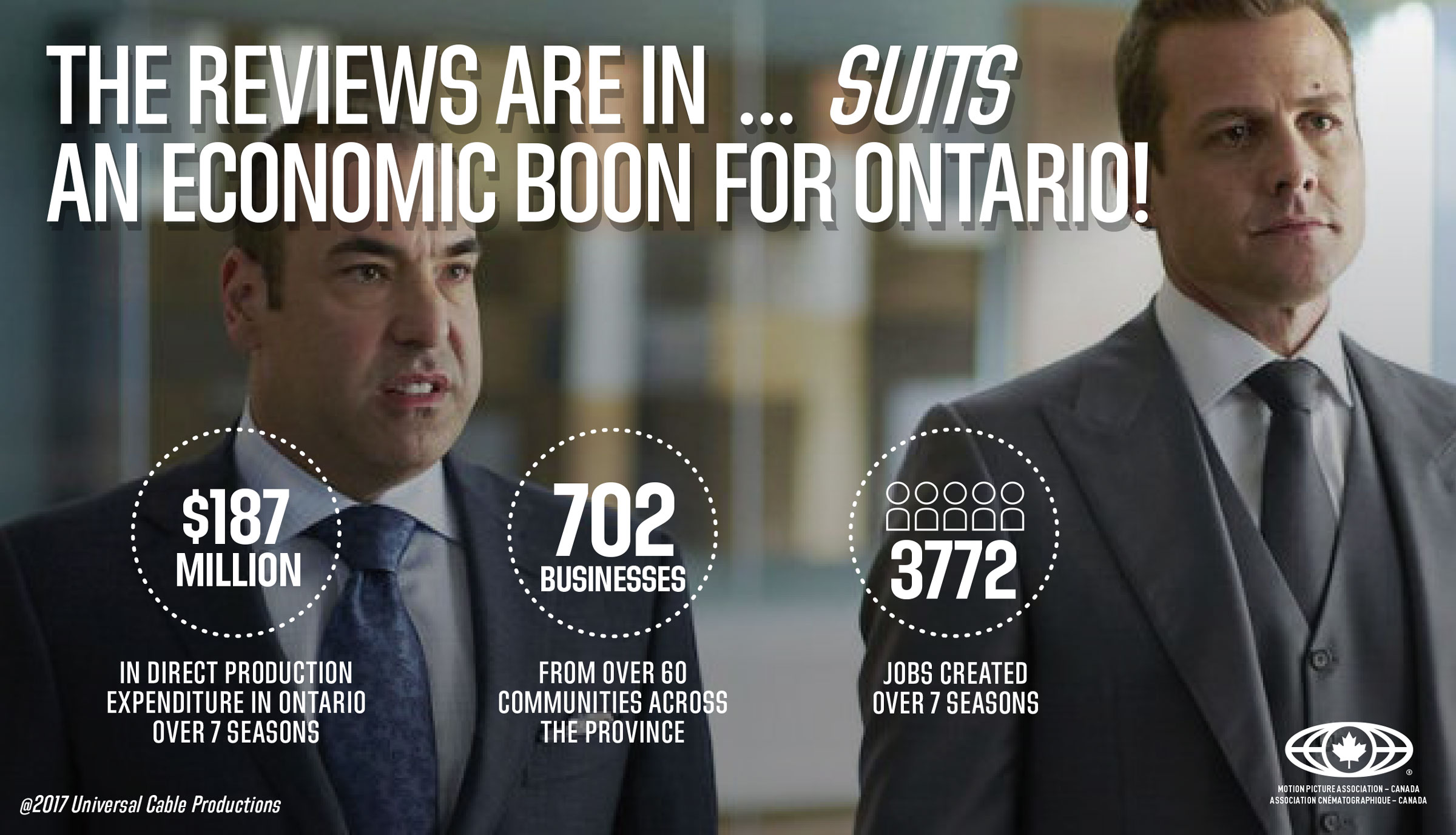 A report released today shows the tremendous economic impact for Ontario residents and businesses generated by NBCUniversal’s hit show Suits. Over the past five seasons, Suits has been produced in Ontario with filming centered in and around the Greater Toronto Area. Today’s release coincides with the series return, following the cliff-hanger fans were left with last summer at the end of Season 5.

The analysis by Canada’s MNP LLP examines the most recent season of production to assess the economic impact of the production over the first five seasons, finding that it supported 2,304 full time equivalent jobs (FTEs) and was responsible for $102.8 million in direct production expenditure in Ontario.  In Season 5 alone, the production spent an estimated $25.74 million on crew, labour, and a range of Ontario businesses including production facilities, catering companies, hotels, vehicle and equipment rentals, retailers, cleaners, landscapers, storage companies, professional service firms and automobile shops.

While fans of the popular series know every detail of what happens at Pearson Specter Litt, what they don’t know is the many Ontarians who help create and benefit from the fictional world of Harvey Spector and Mike Ross.

“A number of NBCUniversal’s most popular and high end television projects have been produced in Ontario,” said Mark Binke, Executive Vice President, Physical Production, Universal Cable Productions. “The incentive regimes established by the Government of Ontario have been a catalyst for our direct investment in the Province, and we love working with the great crews, quality talent, sophisticated production infrastructure and resources that Ontario has to offer.”

The investment provided by the Government of Ontario is estimated to have resulted in economic benefits that include $8.36 in economic output for every dollar of Ontario tax incentive received by the production of Suits.

“We’re proud that Ontario is the number one film and television production jurisdiction in Canada,” said the Hon. Michael Coteau, Minister of Culture, Tourism and Sport. “Suits is a great example of the incredible employment opportunities and substantial economic benefits that make the film and television industry a key driver of the Ontario economy.  Our government is a strong supporter of the creative industries and we look forward to its continued success in 2016.”

About MNP LLP:
MNP is the fastest growing chartered accountancy and business advisory firm in Canada. Founded in 1945, MNP has grown to more than 70 offices and nearly 3,000 team members. MNP is a member of Praxity, a global alliance of leading business advisory firms. MNP’s Economics and Research practice is one of the largest of its kind, and its team members have an established track record in conducting economic impact and industry studies, including studies involving the film and television production industry. Examples of similar studies conducted by MNP include economic impact studies for film and television industries in jurisdictions across North America.