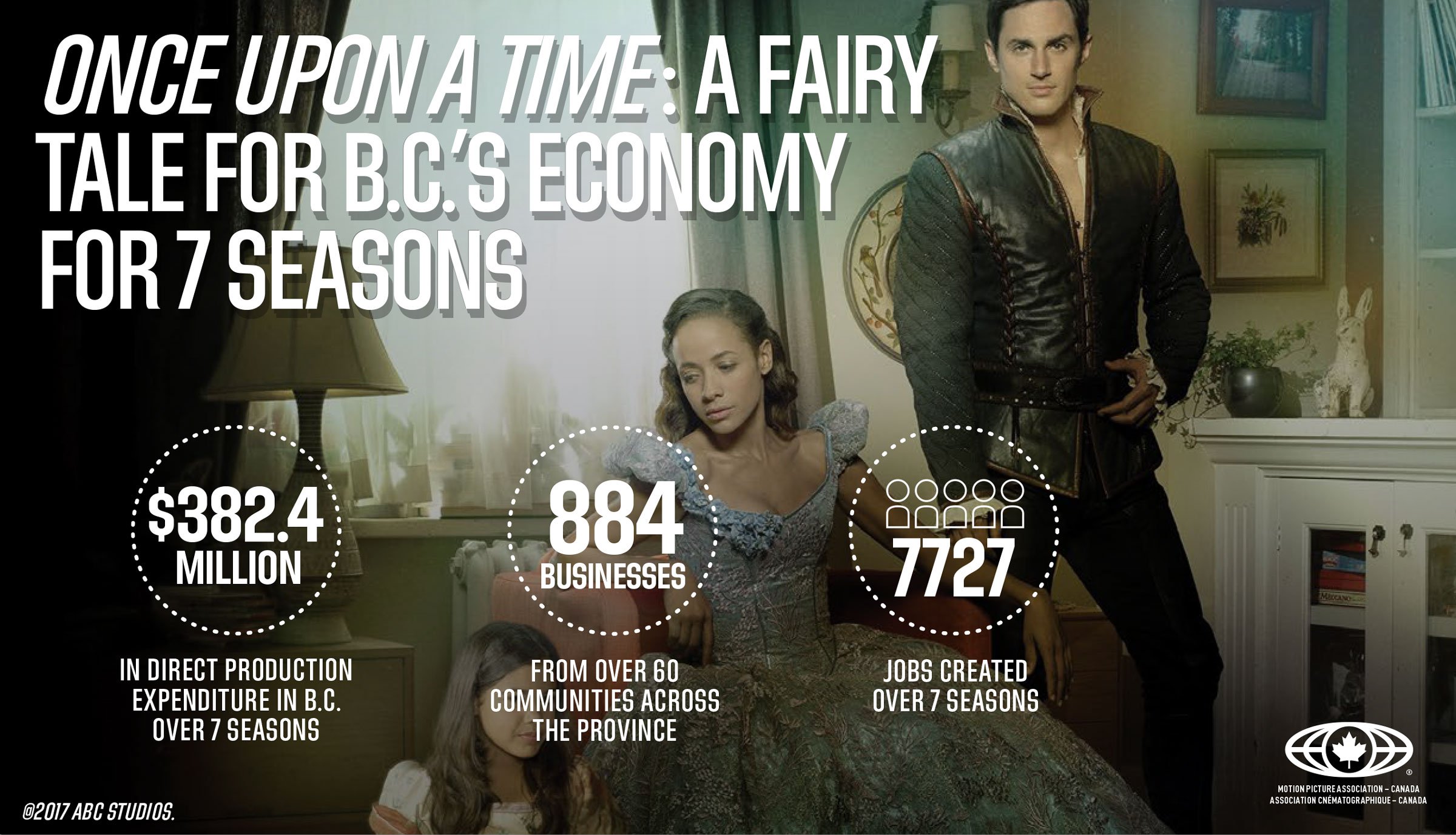 Production of ABC’s Once Upon a Time generates over 5,500 jobs, results in spending over $275M, and creates boost in local tourism in British Columbia

A report released today in conjunction with the 100th episode of ABC’s Once Upon a Time demonstrates the significant economic benefits to the British Columbia economy from the past five seasons of production.

The analysis by Canada’s MNP LLP examines Season 3 to assess the economic impact of the production over the first five seasons and found that it supported 5,585 full time equivalent jobs (FTEs) and was responsible for $276 million in direct production expenditure in British Columbia.

The investment provided by the Government of British Columbia is estimated to have resulted in economic benefits that include $8.44 in economic output for every dollar of B.C. tax incentive received by the production of Once Upon a Time. In addition to the direct economic impact, Once Upon a Time boosted the local economy through a variety of initiatives promoted by Tourism Richmond to dedicated fans from all over the world who are looking to discover the “Secrets of Storybrooke”. From the fabled Cannery Café, to a variety of local hotels and businesses, the Steveston community continues to benefit from large crowds of fans who want to experience the fairy tale world of Emma Swan.

“The release of today’s report shows the incredible economic impact that productions like Once Upon a Time can have provincially and locally,” said Wendy Noss, President, Motion Picture Association Canada. “Once Upon a Time is a fantastic example of how television production can benefit hundreds of businesses and vendors, thousands of local cast and crew, and partner with local communities to create unique tourism opportunities.”

“We love working in British Columbia, with an incredible cast and crew, and with the entire community of Steveston who have embraced the Once Upon a Time production,” said Gary French, Senior Vice President, Production, ABC Studios. “With diverse locations, a competitive and reliable incentive program and an unbelievable wealth of local talent, B.C is the ideal home for Storybrooke.”

“2015 has been a record setting year for filming in the City of Richmond,” said Malcolm Brodie, Mayor of Richmond. “Once Upon a Time, currently in its fifth year of production, plays a significant role in this success, adding economic benefits through hiring a local work force and supporting businesses, equating to millions of dollars annually. The series highlights Steveston Village, the setting for the fictional town,  Storybrooke – building it from a local tourist treasure to an international destination for fans worldwide. We are proud of our standing as a preferred city of the film industry – from our one-stop film office, our unique landscapes, and community cooperation – all making Richmond a location of choice.”

“British Columbia has gained an international reputation for being a world class destination of choice for major international studios such as ABC,” said Prem Gill, CEO of Creative BC. “Once Upon A Time demonstrates the strong partnerships that exist between municipalities such as the City of Richmond, businesses and neighbourhoods which allow our film and television industry to thrive and be a major contributor to our provincial economy and job creation.”

“I want to congratulate Once Upon a Time for their continued success producing a great show and I am enthusiastic about the future growth the production will bring,” said Shirley Bond, Minister of Jobs, Tourism and Skills Training, and Minister Responsible for Labour. “I’m proud that British Columbia has
become a key location for film and TV production in North America, and a growing hub for digital animation and visual effects.”

MNP is the fastest growing chartered accountancy and business advisory firm in Canada. Founded in
1945, MNP has grown to more than 70 offices and nearly 3,000 team members. MNP is a member of
Praxity, a global alliance of leading business advisory firms. MNP’s Economics and Research practice is
one of the largest of its kind, and its team members have an established track record in conducting
economic impact and industry studies, including studies involving the film and television production
industry. Examples of similar studies conducted by MNP include economic impact studies for film and
television industries in jurisdictions across North America.