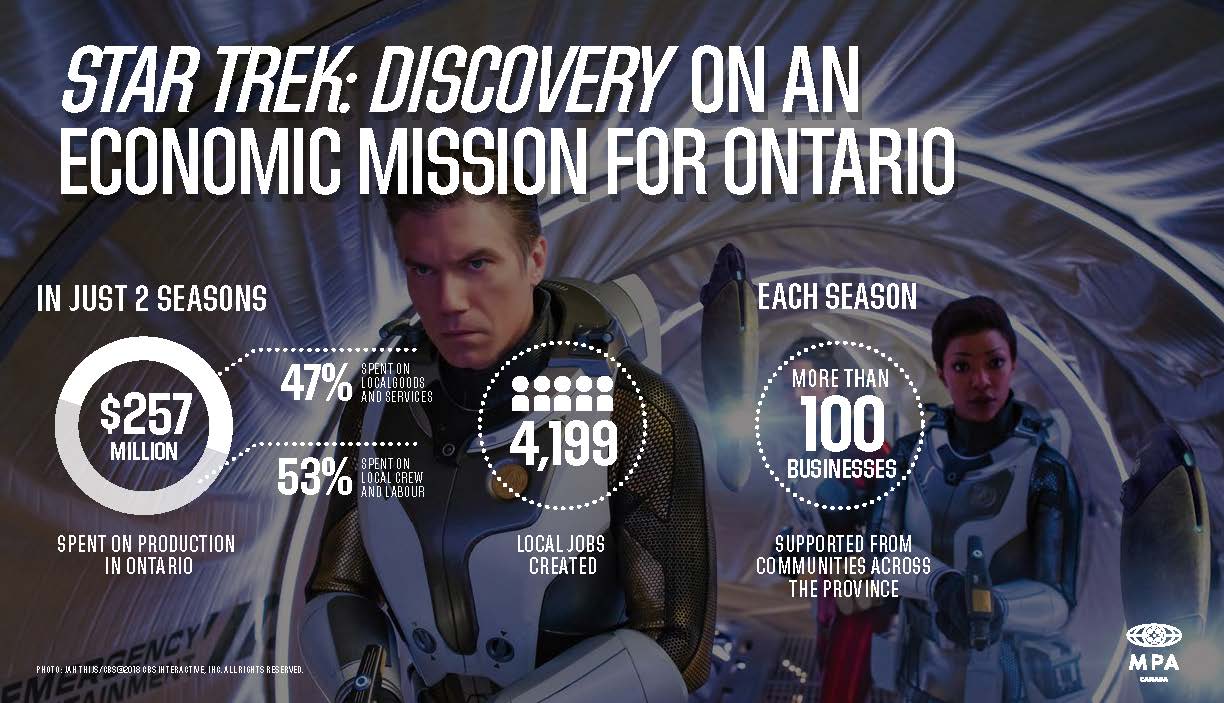 Star Trek: Discovery on an economic mission for Ontario, spending over $257 million in just two seasons

TORONTO, ONTARIO, OCTOBER 31, 2019 – New data released today examined the economic impact of CBS’s Star Trek: Discovery on the province of Ontario. In just the first two seasons, the production spent more than $257 million and created over 4,199 jobs for local crew and other labour.

The analysis by Canada’s MNP LLP showed that each season of production supported well over 100 Ontario-based businesses from communities across the province.

In Season 1 alone, the production spent over $145.6 million; including more than $81 million on local crew and labour. Over 158 businesses from more than 39 communities across Ontario benefitted from over $64.5 million spent on the purchase of goods and services including catering, hotel rooms, vehicle and equipment rentals, furniture and clothing retailers, cleaning and alterations, storage, audio/video service and more.

You can read the complete MNP report here.

“Our government is creating a climate that is open for business and open for jobs by lowering taxes and eliminating unnecessary regulations and red tape,” said Lisa MacLeod, Minister of Heritage, Sport, Tourism and Culture Industries. “Shows like Star Trek: Discovery are an important part of the steady growth that our film and television industry continues to experience – and we are proud to welcome them to Ontario to showcase that we offer the world in one province.”

“The thriving film and television industry is a success story helping to make Ontario open for business and open for jobs,” said Vic Fedeli, MPP for Nipissing and Minister of Economic Development, Job Creation and Trade. “Our government is committed to providing stability and support to ensure the industry continues to succeed and that Ontario remains a leading destination for investment and job creation.”

“Toronto has the infrastructure and the talent to attract top-rated programs such as Star Trek: Discovery,” said John Tory, Mayor of Toronto. “This economic analysis demonstrates why I am so proud to champion our growing screen industry and our City’s commitment to working with our industry partners to develop, expand and diversify both our workforce and production facilities.”

“It’s a testament to the talent in this city that CBS chose Toronto as home to their flagship franchise: STAR TREK,” said Bill Skolnik, Executive Director & CEO, DGC Ontario. “With members of DGC Ontario, CBS found innovative, ambitious crews and inventive, highly experienced Directors, Production Designers and creative teams at a superior artistic level.  The breathtaking scope of STAR TREK: DISCOVERY is Ontario at its finest, delivering the biggest shows in the galaxy.”

“With our Canadian partners, John and Frank, CBS has produced over 250 episodes together here already. The Toronto area has provided series like Star Trek: Discovery with diverse and appealing locations, great production infrastructure and crafts expertise that cannot be easily found,” said David Stapf, President, CBS Television Studios. “I’ve said it before, and I’ll say it again; there is nothing this province can’t provide and the people here can’t create.”

“The data released today demonstrates the significant impact a single television production can have on the provincial economy,” said Wendy Noss, President, Motion Picture Association – Canada. “In just two seasons, Star Trek: Discovery created more than 4,199 local jobs. Star Trek showcases the work of talented local creators and technical artists to audiences around the world, and is a fantastic example of how some of television’s most in-demand content is made right here in Canada.”

Follow us on Twitter and check out The Credits for behind-the-scenes interviews with Ontario creatives, including local Star Trek: Discovery crew: