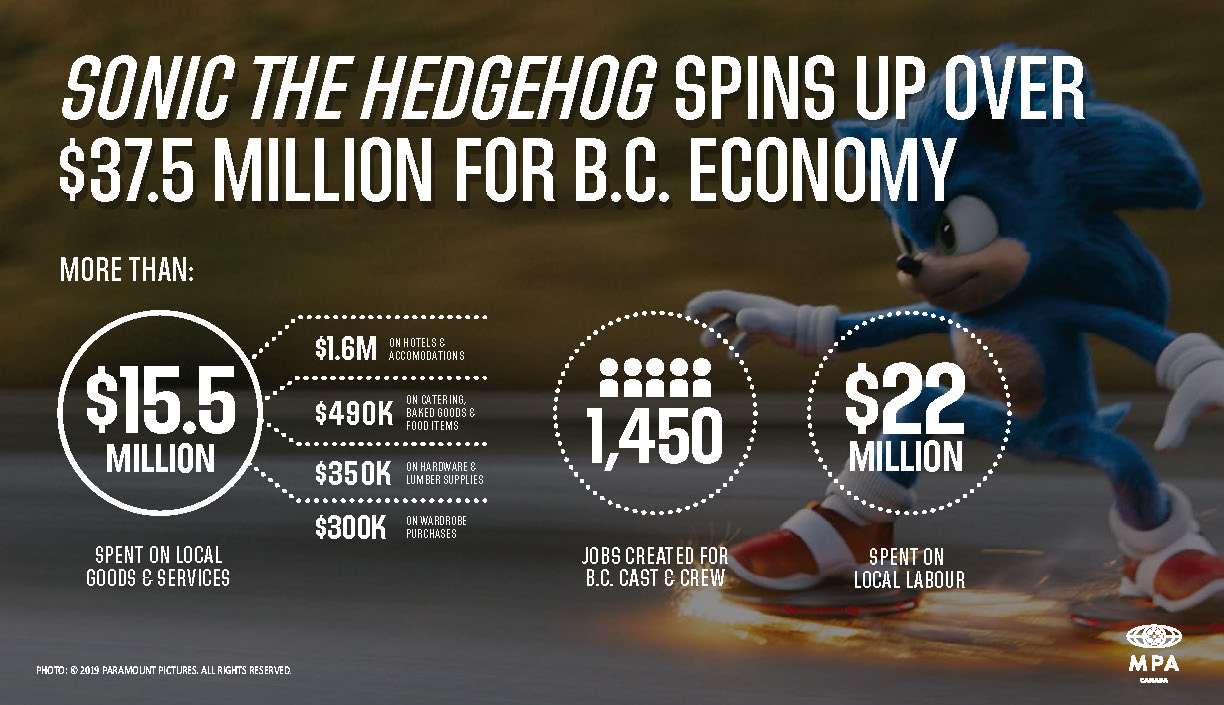 Sonic the Hedgehog Spins Up Serious Spending in B.C., Investing Over $37.5 Million Across the Province

VANCOUVER, BRITISH COLUMBIA, FEBRUARY 20, 2020 – New data released today demonstrates the economic impact of Paramount Picture’s SONIC THE HEDGEHOG in British Columbia, with over $37.5 million spent on production across the province.

In just 53 days of filming, the live-action adventure comedy spent more than $22 million supporting local labour and created over 1,450 jobs for local cast and crew.

SONIC THE HEDGEHOG also benefited hundreds of community businesses with more than $15.5 million in spending on production-related goods and services, including more than:

Based on the global blockbuster videogame franchise from Sega, SONIC THE HEDGEHOG tells the story of the world’s speediest hedgehog as he embraces his new home on Earth. B.C. audiences may recognize filming locations like Shelter Point Distillery in Campbell River, The Diplomat Motel in Nanaimo, Stawamus Chief Park in Squamish, Camp Howdy in Belcarra and a highway chase scene at the Cook Creek Interchange on Vancouver Island.

“I am thrilled that Paramount Pictures chose to film SONIC THE HEDGEHOG in B.C., shooting in locations from Squamish to Campbell River,” said Lisa Beare, Minister of Tourism, Arts and Culture. “Congratulations to the entire production team and especially our talented local crews. It’s the many people who work behind-the-scenes that make B.C.’s film and TV industry thrive.”

“With $3.2 billion in annual economic impacts, B.C.’s film industry continues to play a major role in supporting and diversifying our provincial economy,” said Prem Gill, CEO, Creative BC. “Productions like SONIC THE HEDGEHOG generate significant value regionally, and the expertise of our local crews and regional film commissions are what global leaders like Paramount Pictures know they can depend on.”

“The professional artists and technicians of IATSE Local 891 love a challenge and bringing this much loved video game character to the big screen fit the bill,” said Phil Klapwyk, Business Representative, IATSE Local 891. “SONIC THE HEDGEHOG isn’t just a creative and technical success; it provided good jobs for many B.C. crew members. We’re definitely hoping for a sequel!”

“Working with members of DGC BC, Paramount created SONIC THE HEDGEHOG with some of the most innovative, highly experienced crews in the film and television industry,” said Kendrie Upton, Executive Director, DGC BC. “Not only do major motion pictures like SONIC provide good jobs for the tens of thousands of British Columbians who work behind-the-scenes, they also provide our members with unparalleled exposure, showcasing their world-class creative and technical talent to a global audience.”

“Filming in B.C. provided us with incredible local cast and crew, and beautiful locations for SONIC THE HEDGEHOG,” said Lee Rosenthal, President of Physical Production, Paramount Pictures. “We found great partnership in the local business community, and they satisfied all of our production-related needs.”

“The data released today demonstrates the significant impact just one feature film can have on the local economy,” said Wendy Noss, President, MPA-Canada. “SONIC THE HEDGEHOG created local jobs for almost 1,500 British Columbians whose talented work behind the scenes will be showcased on the big screen.”

Follow us on Twitter and check out The Credits for behind the scenes interviews with Canadian creatives.