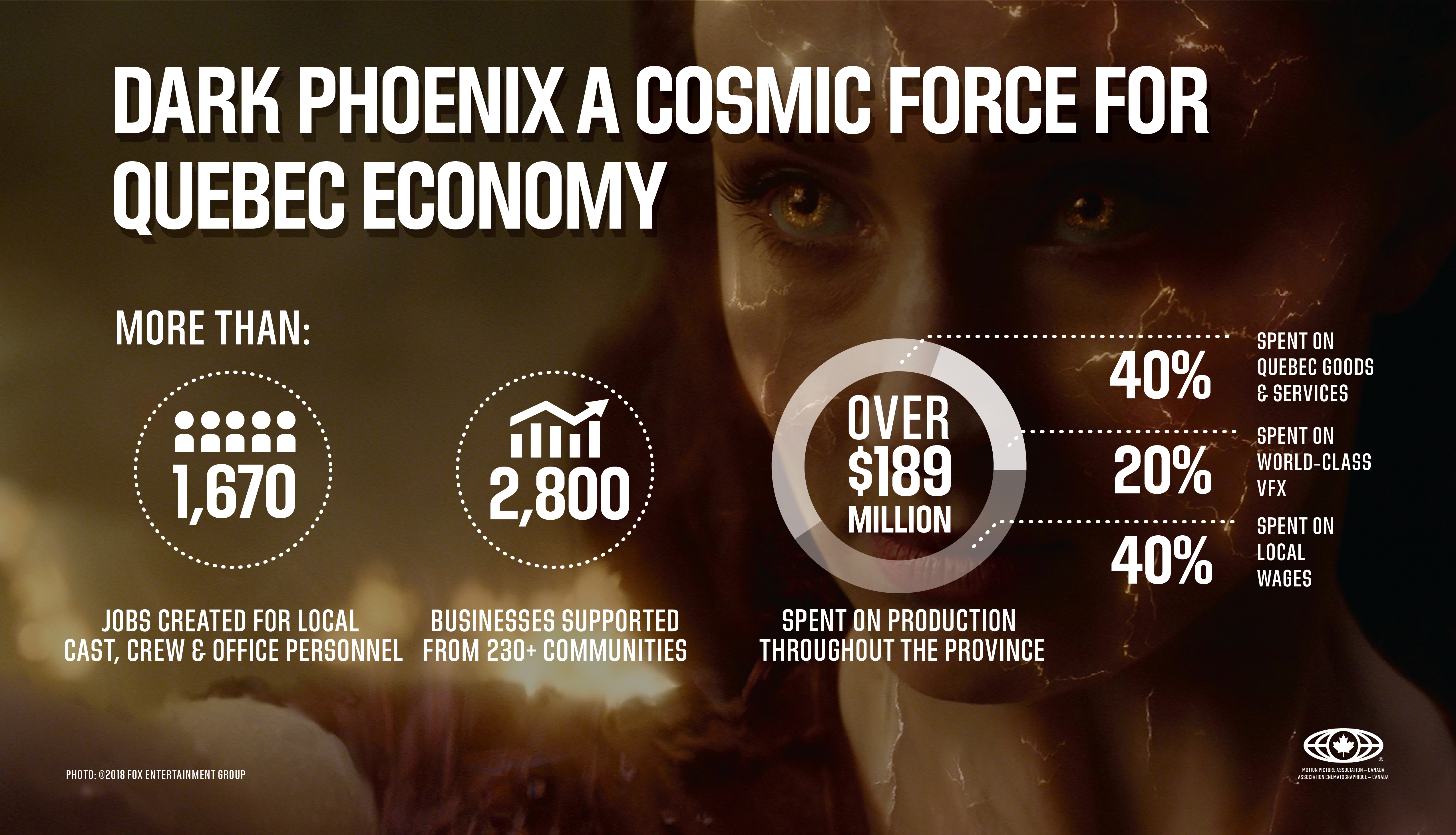 During more than 22 weeks of filming in Montreal and the surrounding areas, Dark Phoenix spent over $77 million on local wages alone, creating more than 1,670 jobs for local cast, crew, and production office personnel. An additional $40 million was spent creating the film’s innovative special effects at Quebec’s world-class visual effects houses.

Dark Phoenix is the culmination of 20 years of X-Men movies, as the family of mutants that we’ve come to know and love must face their most devastating enemy yet — one of their own. It is the third X-Men film in the series to use Quebec as home to its production investment.

The production supported over 2,800 Quebec businesses from more than 230 communities, and spent over $72 million on a wide-range of local goods and services including more than:

Dark Phoenix is now in theatres.

*All figures calculated in Canadian dollars*

“Big productions like X-Men movies bring significant investments to Canada. They have a positive impact on host communities and create good middle-class jobs,” said Honourable Pablo Rodriguez, Minister of Canadian Heritage and Multiculturalism. “We have prime shooting facilities and beautiful locations. Investors should know they are welcome here!”

“I take pride in the fact that beyond the tax incentives we can offer to them, foreign producers are choosing Quebec as it boasts competent technical crews, world renowned VFX companies and studios with state-of-the-art equipment,” said Nathalie Roy, Minister of Culture and Communications and Minister Responsible for the French Language. “It is therefore not surprising that major producers like the ones who created Dark Phoenix come to Quebec for the filming and post-production of their works. Moreover, we are happy that the dubbing of Dark Phoenix has called upon Quebec actors and craftsmen, thus generating significant spin-offs for this economic sector. We can also celebrate the impact such productions have on job creation and world-class reputation of our expertise.”

“Hundreds of IATSE members helped to create Dark Phoenix. Some of our members have now worked on all three of the X-Men films produced in Quebec, so it’s been really great to watch them grow in their craft throughout the series,” said Christian Bergeron, Business Agent IATSE 514. “The presence of blockbuster productions like Dark Phoenix have an enormous impact on our local film industry, and contribute to Quebec’s creative economy and the provincial economy as a whole.”

“This is the third time Fox has produced an X-Men film in Quebec,” said Steve Freedman, Senior Vice President of Production at 20th Century Fox. “Filming in and around Montreal, we have always had access to incredible local talent, creative artists, and crews as well as great shooting locations, world-class Stages and VFX studios.”

“Quebec has become an increasingly popular destination for film and television production in Canada,” said Wendy Noss, President, Motion Picture Association – Canada. “The data released today demonstrates the massive impact productions like Dark Phoenix can have on the people working in Quebec’s growing film and television industry, and the wide-range of local businesses supported by millions of dollars in goods and services purchased from hundreds of local communities.”

Follow us on Twitter and keep an eye out for interviews with Quebec Creatives who worked on Dark Phoenix via our online magazine, The Credits.